New independent streams in flespi can forward data from channels, devices, or both, and enable the flespi platform to work in push and pull modes.
connectivity hub stream

Think of flespi as a warehouse where your devices deliver data. flespi stores it and sends it out to the addressee(s) in response to a REST API call. This is a PULL mode because data sits in the warehouse until requested (pulled).

An alternative is the PUSH mode. And this one caused us sleepless nights since it is another opportunity to help our customers which we haven't tapped. Until very recently. Advantages of PUSHing are plenty and obvious:

Now we are all set to present you the new streams interface. Here are some quick facts about flespi streams:

Below is the illustration of what streams are up to:

MQTT is one of the most widely used protocols for IoT. Currently, flespi streams support three MQTT-based implementations: Amazon Web Services, Thingsboard, and general MQTT. Here are some tips for each of them:

Upon completion of the stream config, you should subscribe it to receive data from devices or channels. Do so by selecting the desired stream in the Streams tab on a channel or device card:

Or use the Devices and Channels tab on the stream card to assign the required instances: 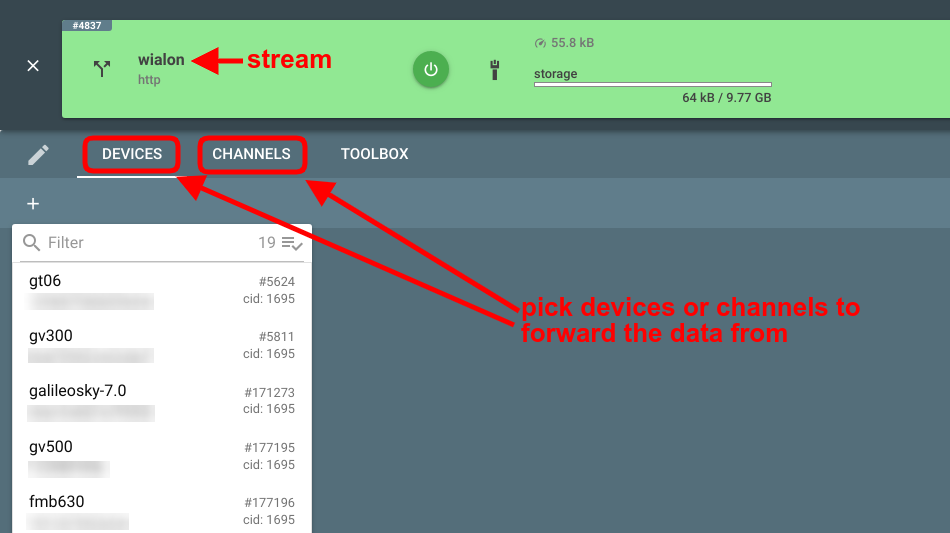 Note: the current stream implementation is just sort of a wrapper for our internal MQTT message bus that processes all messages from all channels and devices. Now you also have direct access to this technology. It gives impressive possibilities to developers, so don't forget to check it out!

We also have examples of the HTTP stream receiver in different programming languages that you can deploy on your server to effectively consume the data from the HTTP stream.

Get flespi news on Telegram!

Was this helpful?
19 May, 2022 |
Not just devices. Collecting data from telematics platforms in a single data hub
Consider flespi as a technology partner to aggregate data from different platforms and prepare it for easy consumption.
21 April, 2022 |
Enabling one-stop IoT connectivity and telematics data troubleshooting with flespi
Merge EMnify connectivity data with the telemetry data from your GPS trackers and to see a more complete picture of your fleet status in Wialon.
‹ › ×